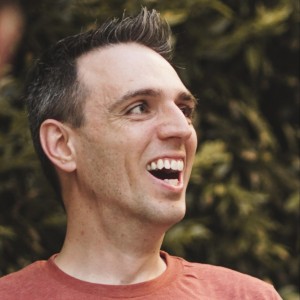 As one who uses git’s diff3 style conflict markers, I have actually come to enjoy performing git conflict resolution. Using diff3 makes conflicts significantly easier to reason about. There’s an edge case, however, that is not so understandable. You may encounter something like this:

What you’re seeing in this example (with Temporary merge branch markers) is the result of diff3 with a criss-cross merge conflict. I’ll explain this with a sequence of definitions.

A criss-cross merge occurs whenever two branches merge into each other at different points in time.

Consider this sequence of events:

With diff3 off, this merge conflict would look simply like this:

First, with all the extra markers, you’ll want to determine what the actual conflicting lines are, so you can differentiate it from the diff3 common ancestor output. 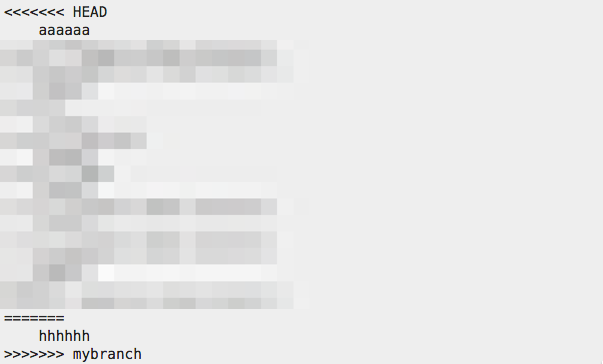 In the case where two conflict resolutions are conflicting, aaaaaa and hhhhhh are the two resolutions.

Next, examine the content of the merged common ancestor. 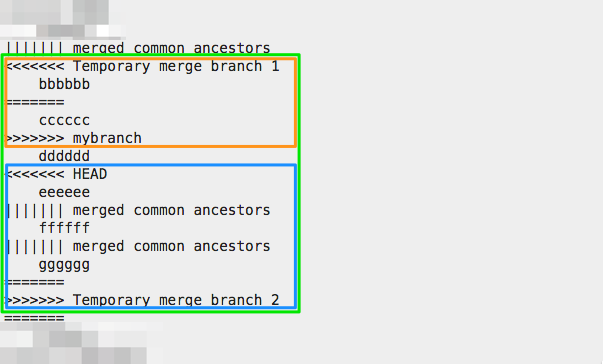 With this particular merge history, there were more than 2 merge bases, which required multiple temporary merge branches which were then merged together. The result when there are many merge bases and conflicts can get pretty hairy and difficult to read. Some say don’t bother, just turn off diff3 for these situations.

How do you resolve a conflict like this? While technical analysis may be possible, your safest option is usually to go back and review the history in all the involved branches around the conflict, and manually craft a resolution based on your understanding.

These conflicts are the worst, but there are some behaviors that will help prevent them.